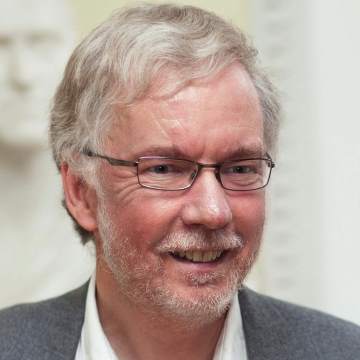 The Big Bang theory is well-established, but how complete is it? Does it describe the absolute beginning of physical reality, or is there perhaps more to be discovered that might place it in a broader cosmic context?

We welcome the award-winning British science writer Brian Clegg, author of dozens of popular science books in print, for an engaging and thought-provoking conversation on his book Before the Big Bang—an interview conducted, specially for The Mind Renewed, by TMR's "roving reporter" Mark Campbell.

Born in Lancashire, UK, Brian attended the Manchester Grammar School, then read Natural Sciences (specialising in experimental physics) at Cambridge University. After graduating, he spent a year at Lancaster University where he gained a second MA in Operational Research, a discipline developed during WWII to apply mathematics and probability to warfare, and since widely applied to business problem solving. From Lancaster, he joined British Airways, where he formed a new department tasked with developing hi-tech solutions for the airline. His emphasis on innovation led to working with creativity guru Dr. Edward de Bono, and in 1994 he left BA to set up his own creativity consultancy, running courses on the development of ideas and the solution of business problems. His clients include the BBC, the Met Office, Sony, GlaxoSmithKline, the Treasury, Royal Bank of Scotland and many others.

Brian now concentrates on writing popular science books, with topics ranging from infinity to 'how to build a time machine.' He has also written regularly for numerous magazines and newspapers, including Nature, BBC Focus, BBC History, Good Housekeeping, The Times, The Observer, Playboy, The Wall Street Journal and Physics World. His books have been translated into many languages, including German, French, Italian, Spanish, Portuguese, Chinese, Japanese, Polish, Turkish, Norwegian, and Indonesian. Brian has given sell-out lectures at the Royal Institution in London, and has spoken at venues from Oxford and Cambridge Universities to Cheltenham Festival of Science. He has also contributed to radio and TV programmes, and is a popular speaker at schools. Most recently he appeared with the BBC's business editor, Robert Peston, teaching him quantum theory, took part in a feature on time travel to accompany the movie Looper and took part in the University Challenge Christmas Special. Brian is a Fellow of the Royal Society of Arts, a Member of the Institute of Physics, was a Royal Literary Fund Fellow at Bristol University and is also editor of the successful popularscience.co.uk book review site.