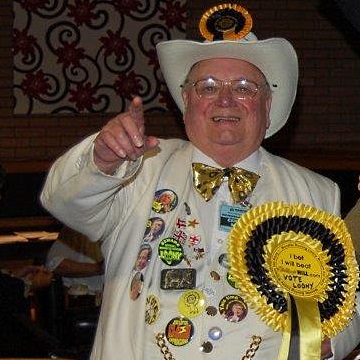 "If you don’t usually vote, then vote unusually. Vote for me!"

Back in 2017, "Howling Laud" joined us to discuss the history, aims and achievements of the UK's most well-known unconventional political party. This time we scrutinse the party's recently-published Election Manifesto and ask why it makes sense to "vote for insanity"—whichever party that happens to be.

In 1999, following the death of the party's founder Screaming Lord Sutch—who had led the party through its previous incarnations, such as "National Teenage Party" and "Go To Blazes Party"—OMRLP members voted for their new leader, choosing jointly a cat called Cat-Mandu and his owner Alan "Howling Laud" Hope. Although Cat-Mandu died in 2002 and now serves as one of the party's "spiritual leaders", "Howling Laud" proudly continues as the UK's longest-serving party leader.